A new survey by the Pew Research Center's Internet Project and Carnegie Mellon University finds that most Internet users would like to be anonymous online, but many think it is not possible to be completely anonymous online.

Some of the key findings:

The representative survey of 792 Internet users also finds that notable numbers of Internet users say they have experienced problems because others stole their personal information or otherwise took advantage of their visibility online. Specifically:

Most Internet users know that key pieces of personal information about them are available online -- such as photos and videos of them, their email addresses, birth dates, phone numbers, home addresses, and the groups to which they belong. And growing numbers of Internet users (50%) say they are worried about the amount of personal information about them that is online -- a figure that has jumped from 33% who expressed such worry in 2009.

"Our team's biggest surprise was discovering that many Internet users have tried to conceal their identity or their communications from others," noted Sara Kiesler, an author of the report and the Hillman Professor of Computer Science and Human-Computer Interaction at Carnegie Mellon. "It's not just a small coterie of hackers. Almost everyone has taken some action to avoid surveillance. And despite their knowing that anonymity is virtually impossible, most Internet users think they should be able to avoid surveillance online--they think they should have a right to anonymity for certain things, like hiding posts from certain people or groups."

Asked whether current laws provide reasonable protections of people's online privacy, 68% of Internet users believe the laws are not good enough in protecting their privacy online.

"Users clearly want the option of being anonymous online and increasingly worry that this is not possible," said Lee Rainie, Director of the Pew Research Center's Internet Project and an author of a report on the survey findings. "Their concerns apply to an entire ecosystem of surveillance. In fact, they are more intent on trying to mask their personal information from hackers, advertisers, friends and family members than they are trying to avoid observation by the government."

Many users employ an array of strategies to mask their identities and try to avoid detection. Some 64% clear cookies and their browser history and 41% have disabled cookies. They also delete material they have posted in the past, create usernames that are hard to tie to them, use public computers to browse, and give inaccurate information about themselves. Some 14% say they at times encrypt email and 14% say they use services like virtual networks that allow them to browse without being tied to a specific Internet protocol (IP) address.

"These findings reinforce the notion that privacy is not an all-or-nothing proposition for Internet users," said Mary Madden, Senior Researcher at Pew Research. "People choose different strategies for different activities, for different content, to mask themselves from different people, at different times in their lives. What they clearly want is the power to decide who knows what about them."

How much do you care that only you and those you authorize should have access to this information?% of adult Internet users who say who say it is important -- or not -- to them to control these types of information

This survey by the Pew Research Center's Internet Project was underwritten by Carnegie Mellon University. The findings in this report are based on data from telephone interviews conducted by Princeton Survey Research Associates International from July 11-14, among a sample of 1,002 adults ages 18 and older. Telephone interviews were conducted in English by landline and cell phone. For results based on the total sample, one can say with 95% confidence that the error attributable to sampling is plus or minus 3.4 percentage points and for the results from 792 Internet and smartphone users in the sample, the margin of error is 3.8 percentage points. 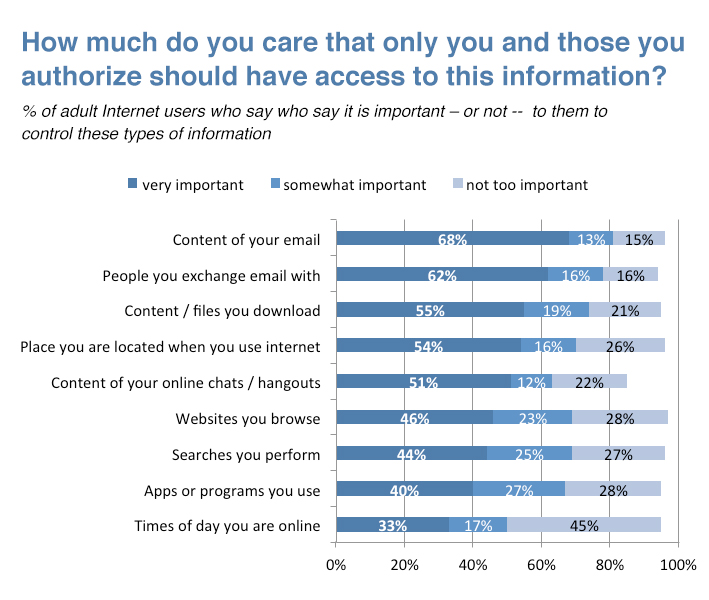